Rolls-Royce, as a company, may have become a legend over the decades, thanks to its cars, but the wealthy lifestyle is much more than that. And the Goodwood plant isn’t just about making cars. A while back, we reported that Rolls-Royce was looking for a new design for its green corner on the West Sussex property, also known as the Wildlife Garden.

At the time, the British brand would ask for help from anyone willing to submit a design proposal to management and people were quick to share their ideas. There was a twist though. True to tradition, Rolls-Royce only accepted proposals from children, aged 5 to 11. Today we actually found out who is the winner, namely the drawing nicknamed “Tiggy Town”, made by 8 year old Iris.

“We are delighted to announce that Tiggy Town is the winner of our Wildlife Garden competition. The judges were charmed by Iris’s ideas for a space dedicated to hedgehogs, and impressed by her creativity, imagination and attention to detail. They especially admired her research on Rolls-Royce and the connections she made between the elements of her garden and the cars we build a short distance away.

“Iris is a worthy winner; his ideas will make a real difference to our animal garden, which is so important to us, our many visitors and, most importantly, the wide variety of nature it supports, ”said Andrew Ball, Head of Corporate Relations, Rolls -Royce Motor Cars. 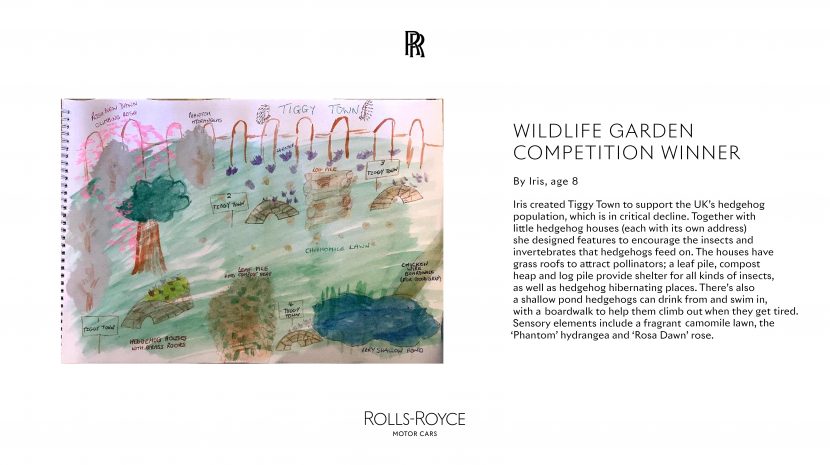 Established as part of the original landscaping when the factory was built in the early 2000s, the Wildlife Garden is home to a wide variety of plants, insects, birds and animals native to southern England. The new features are at the heart of a rejuvenation project carried out in partnership with Chichester District Council and the South Downs National Park Trust, to reflect changes in conservation thinking and practice.

The winning design features beautiful little hedgehog houses with features that attract the type of insects and invertebrates that hedgehogs feed on. . The houses have grass roofs to attract pollinators; a pile of leaves, a pile of compost and a pile of logs to shelter all kinds of insects, as well as splendid places of hibernation for the hedgehogs. Hedgehogs can use the shallow pond for both drinking and bathing, with a walk to help them out if they become tired.

For her work, Iris will be driven with a driver to the House of Rolls-Royce, then perform an official opening ceremony for the rejuvenated garden, before watching her winning film in its new setting. It will receive a render of the animal garden with its suggested features in the spotlight, created by the Rolls-Royce bespoke design team with the same software used to design customers’ cars. Iris and three finalists also receive framed certificates to recognize their hard work and creativity.